How To Swim With The Sharks Without Becoming Fish Food

A primer on Managed Care contract review and negotiations for ophthalmic practices and ambulatory surgery centers. 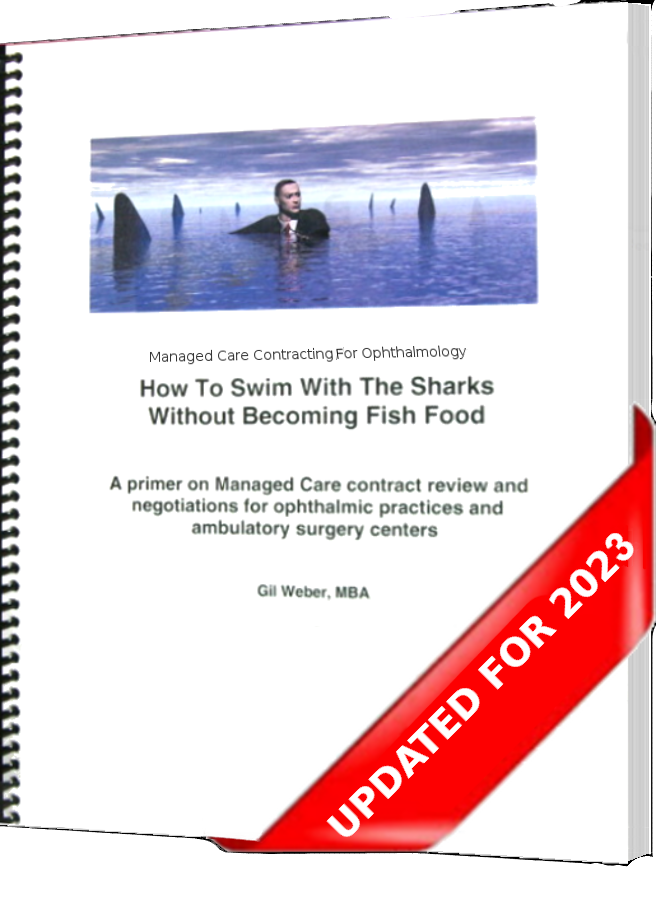 How To Swim With The Sharks Without Becoming Fish Food

Managed Care contract review and negotiations are almost always last on everyone’s list, typically because it’s hard to know where to begin to get traction. And that’s half the battle.

This primer SOLVES that problem for you! It’s a self-help, “how to” guide that trains the reader on what to watch for as well as how to advocate for their practice and/or facility.

For your reading pleasure, below, I've included links to the Primer's full Table of Contents as well as PDFs for some sample pages. I hope you enjoy them!

What about all the “legalese” in Managed Care contracts? How does a layperson understand what’s written in them?

Please see the testimonials. I’ve “translated” contract (Provider Agreement) legalese into everyday vernacular that explains what it all means to you in understandable business terms.

How do I know if I’m even prepared to approach third-party payors to seek renegotiation of our contracts?

That’s covered. (See Table of Contents.) The Primer walks you through the process including check lists to determine what you need before and during contract review and negotiations.

Do you provide legal guidance?

No, I am not an attorney. But after more than 40 years in Managed Care I have a solid understanding of the contract review and negotiations processes from both the payor and provider perspectives. (See About the Author.) In the Primer I draw attention to certain potentially problematic contractual provisions that I recommend for review by an attorney or your malpractice carrier.

Do you give real-life examples of roadblocks put up by third-party payors, and how to get around those?

Yes – real-life examples of successes, and also of some roadblocks I could not get around when an inflexible payor’s position was “Take it or leave it.”

What about the payment option that includes an hour of consulting support?

After you’ve read and digested the Primer’s content that hour is yours to use as you wish. Ask questions about the Primer, or about a specific contract you’re considering, or anything else related to contract review and negotiations.

Is additional support available no matter which purchase option is selected?

Yes. My standard rate is $200/hour. Contact me through the Feel Free To Ask link.

Even if using your Primer sometimes we may not be successful in negotiating or renegotiating a certain contract?

You might come up against a particularly obstinate payor that isn’t much bothered if your practice or facility drops from the network and the Members (your patients) are forced to leave the physicians of their choice. Perhaps that payor feels it has plenty of perfectly viable, alternative contracting options – others willing to accept the (dreadful) terms and conditions as-is, and not “making waves.” And some payors have well-deserved reputations for offering marginal or non-viable reimbursements, and preposterous terms and conditions. Sometimes Managed Care is not fair.

But by using the Primer you can be better positioned to determine up-front the viability of proposed reimbursements and which provisions are decidedly unfriendly and potentially problematic. Then how then to push back with suggested alternative language and reimbursement counter-proposals that would move the Managed Care playing field back toward level so that when all is said and done the deal would make dollars and sense.

"Your information is not only informative, but tells the administrator *how* to do it."
- Maureen J. Tipp, CPA, CMPE, COE
Consultant
Tipp Consulting
Marana, Arizona
(formerly Administrator, Northwest Eye Surgeons, Seattle Washington)

"Gil, I am impressed. I thought I would have a difficult time getting through it, but you made it very entertaining and informative. This will be beneficial to ANYONE needing to review Managed Care contracts."
- Maureen Lynch Yarbrough, OCS
Administrator
Pediatric Eye Consultants of North Florida
Jacksonville, Florida

"You have done a very comprehensive job in the meticulous writing about what could otherwise be construed as a rather boring topic! KUDOS on a job well done."
- Steven R. Robinson, FASOA, COE
Senior Practice Management Consultant
SR Consulting
Ooltewah, Tennessee

Gil Weber has been involved in Managed Care since 1978, every day of that in eye care. He began his practice management and Managed Care career as an optician for a California multi-specialty medical group designing, equipping, and managing three eye care examination and optical dispensing facilities. He was responsible for hiring and training the dispensing staff and for developing personnel policies specific to the dispensaries.

In 1979, long before most of the country could even spell HMO, Mr. Weber started collecting utilization and cost data that in 1981 established an at-risk reimbursement arrangement for the dispensaries. Under this the dispensaries were paid a flat fee no matter the type of spectacle lenses provided under a benefit plan, no matter whether a frame was or was not included, no matter the wholesale frame cost up to the patient’s benefit level.

In 1985 he transferred to the medical group’s HMO parent organization and was appointed as National Director of Vision Care Services. His first task was to research and write for the HMO’s two California plans what he believed were the nation’s first optometric quality assurance protocols for an IPA-based HMO. In 1986 the HMO acquired three other plans and grew overnight from 700,000 lives in 13 states to a little over 2 million lives in 26 states. As a result clinical lab services management was added to his responsibilities.

Ultimately Mr. Weber was responsible for evaluating contracts held between the various states and their vision care and clinical lab vendors, for implementing requests for proposal (RFPs) to bring down costs while maintaining quality and access to care, and to contract for the best rates he could secure.

Since then he has held several other senior level management positions including marketing and contracting duties with a national vision care third party administrator (TPA), consultant to a consortium of West Coast multi-specialty medical groups, consultant and Managed Care trainer for Vision Service Plan’s (VSP’s) national sales staff, and Managed Care Director for the American Academy of Ophthalmology. Since 1997 he has served as a consultant to ophthalmic practices and ASCs.

Over the years Mr. Weber has earned national recognition as a writer, lecturer, and expert on practice management and Managed Care. He is the author of eight books and monographs on practice management and Managed Care, and contributing author to seven others. He has presented more than 100 lectures, workshops, and teleconferences to professional organizations, and published more than 100 journal articles.

In addition Mr. Weber has served as chairman for six Managed Care conferences and as contributing editor for three professional journals. He was honored as the 1996 Adrien and Gladys Drouilhet Lecturer in Ophthalmology at the University of Texas - Houston Medical School, and was awarded the American Academy of Dermatology's 2002 "Golden Triangle Award" for excellence in public education of Dermatology issues. And while working full time he earned an MBA from Pepperdine University in Los Angeles, graduating first in a class of more than 300.

Note: This Primer is only available as a spiral bound hard copy.

Includes Option 1 and one hour of Gil's consulting time (a $200 value!) to answer your questions.

Important!
Include the following with your check.